My son, the 14-year-old who wants to make things right after making them wrong, has one particular girl at school with whom he most definitely does not get along. It's gotten ugly in the past, though just how ugly, I don't know since he is a teenager and therefore by law and nature is not allowed to tell me everything (and sometimes not anything). I just know it's gotten ugly enough (and I'm talking arguing here and personality conflicts, not abusive name calling or bullying) that this child's mother felt the need to scold my son loudly and angrily in public in retribution for an exchange my son and her daughter had had weeks earlier. As my son told her, "I'm sure you want to believe everything she told you, but there are two sides to every story. I'm sorry you don't like what you heard." And he hasn't spoken to this girl since.

Now, I didn't find out about this public scolding until a couple of months after it happened. That's just how my son rolls: he sees no reason to involve me in issues like this because, in essence, they're non-issues for him. But he knows they won't be for me. And then the non-issues become issues for him, because, as a Mama Bear, I have a very hard time seeing straight when it comes to my children being humiliated or simply hurt in public. My parents protected me and defended me and never for a moment thought to question whether they should, whether I was to blame in part or whole. And their protection and defense of me made me want to always be protection-worthy and defensible. It made me want to be a better person.

Because my son didn't want this non-issue-now-an-issue to become an even bigger issue, I held tight and simply told the mother that in the future, I hoped she would come to me about any problems she or her daughter had with him.

That was several weeks ago.

Tonight, my son's school is in the midst of a big graduation party for its 8th graders. (A post on shooting for mediocrity will follow at a later date, because, really, when did graduating 8th grade become such a huge celebration? And if we celebrate 8th-grade graduation with a prom-level party, what are we going to do for prom? Still, I admit I got suckered into the hubbub.) And he found out yesterday that this same girl was holding a pre-party party for all of her friends . . . and all of his. Obviously, his name wasn't on the invite list. Nor were ours, since the party was for parents as well. Was I offended? Not at all. As I told a friend, I'm of the belief that people can only give offense if you're willing to take it.

But was I upset? Oh, yeah. Because, I wonder, aren't we, as adults, supposed to set an example for our children? Aren't we supposed to be teaching them about kindness and making peace with each other and second chances (or 3rd or 70 times 7)? Why do we too often model that exclusivity is acceptable and that whatever is self-satisfying is sufficient?

My son was fine about it all, of course. I was the one with the headache that wouldn't go away until he came home from playing football with his friends after school, happy and looking forward to the dance. Still . . . this was wrong. Pure and simple wrong. The wrongness wasn't in not inviting my son. The wrongness was in making sure he was the only one not invited. Fortunately for him, he didn't feel excluded.

I spent several hours at the school this morning getting the gym ready for the dance. More parents spent all day yesterday decorating. More were expected this afternoon. Parents also helped out with chaperoning, providing food, and volunteering to clean up tonight. Many of the girls bought new dresses for the night. Plenty of moms and dads were surely doing what I was doing an hour before: ironing shirts and making sure our sons had belts on. I can only imagine (because I don't feel like actually calculating) the number of collective hours the parents of these 8th graders spent in making sure their kids would have a good time tonight and making sure they were "ready" for the party.

But I think, perhaps-- No, I think, definitely, that it wouldn't hurt any of us--me included--to spend a few more hours making sure they're ready to be presented to the world, loaded up with generosity and kindness rather than hairspray, makeup, and matching socks. 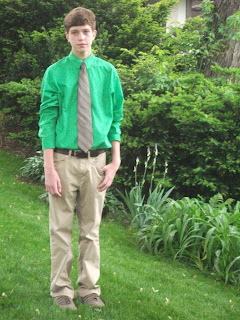 The Chance to Make It Right

A couple of months ago, my oldest son told me that I tend to "freak out" over little things. I was shocked. I told him I'd always made a conscious effort to be calm about grades, friends, forgetfulness, messy bedrooms, long hair, and every other minor teenager issue that can be blown completely out of proportion. So I've made an even greater effort since then because, above all else, I don't want my kids to ever be afraid to talk to me. So last night I asked him if he felt I'd been "freaking out" a little less. He kind of shrugged and said, "Sometimes, if we mess up on something, rather than letting us fix it, you say, 'Never mind. I'll take care of it myself.' You don't give us the chance to make it right."

Example: Last week, he spilled quite a bit of milk in the fridge. I was sitting nearby and as I got up, he said, "I'll take care of it." I groaned and said, "No. It's fine. I've got it." Then I cleaned up the mess instead.

I explained to him last night that me cleaning up the mess is my way of letting him know I'm not angry even if I'm frustrated. I've always felt not that he's incapable of making things right, but rather that I don't mind making things right so he can move on.

But I told him I was sorry and that in the future, I'd back off and let him clean up his own messes.

Obviously, I've thought about this conversation a lot, or I wouldn't be writing about it now.

I'm a mom. You can throw any other labels on to me that may fit--wife, editor, daughter--but the one I've fought for the hardest and struggled with the most is "mom." And I take that label seriously. I agonize over my kids and over making the right decisions about and for them. And although my oldest is 14 now, I still have this overarching need to protect all of them--sometimes from the world and sometimes from myself. I've been doing this for so long--preventing messes and cleaning them up--that I haven't realized that they're trying to prevent and clean up their own as they get older.

And they need to. For several reasons. I know that. They need to see they can't always rely on someone else to do it for them. But more importantly, they need to know they're capable of this--of screwing up and recovering and moving on. They need to be able to make things right or they'll never feel it's okay when make them wrong in the first place.
Posted by Bobbie at Tuesday, May 17, 2011 4 comments: