I've never been any sort of domestic goddess. I like cooking, but it's been a long process of "becoming." The first meal I ever made for my husband tasted, as he so kindly put it, like Lysol smells. I liked it, but chicken deep fried in lemon pepper batter with lemon rice on the side obviously wasn't his thing. I never made it again. My landlady at the time did her best to teach me to cook "real" dishes. She was Italian, and for three and a half years I was her pet project . . . and a disappointment.

Something clicked between then and now, and most meals I make are edible at the very least and often pretty darn good. Just don't ask me to make beef of any sort because I get lost in that section of the meat department. I really don't know one cut from another and I get frustrated and end up serving beans to my family that night instead.

For 17 years of marriage, however, I have never really tried the sewing side of domesticity. The idea of making curtains and duvet covers and pillowcases and clothing of any sort? I just can't take myself there because I have flashbacks to my childhood and the polyester t-shirts I wore--the same pattern in varying material (but always polyester)--for several of my formative years. "Traumatized" would be a strong word. "Shell-shocked" would not.

This Christmas, however, I took the leap. Ron asked what I wanted, and I confidently said, "A sewing machine." The excitement in his voice was sweet . . . a certain air of innocence there, like a child who can't believe his good luck at getting the toy he always wanted but never hoped for out of fear of being disappointed.

Here's the one I picked out. (I needed a beginner's, and even this one is a little advanced for me. See that knob on the right? I've spent two days trying to figure it out.) 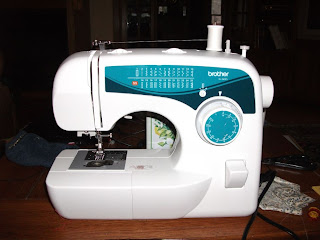 And here, apparently, is what I'm supposed to be wearing while I sew. And another reason the idea of sewing has always frightened me a little. Am I required to wear slippers? Obviously not. But after a few months at my little machine, will I resort to slippers and a housecoat as my go-to outfit? I've decided I have to have faith in the friends I have who sew and get dressed every day. 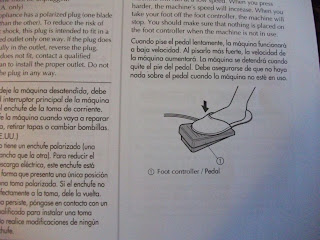 Also to ward off the slippers and housecoat, I've decided to not make a single curtain, duvet cover, pillowcase, or article of clothing until I have mastered these: 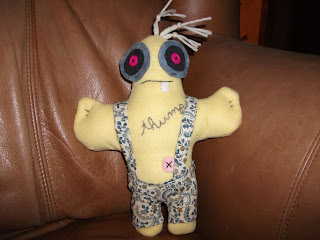 Okay, so that was my first. His name is "Thump-er" and he's a love bird. Those are wings (misshapen, yes, but perfectly functional in his world) and eyes wide with love.

I started this today and don't know yet where I'm going with it. 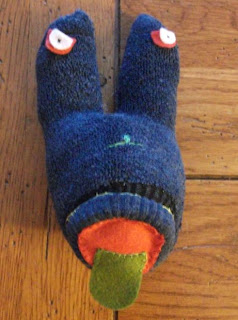 Finally, to keep myself entertained while making monsters, I watch monsters. That's "Angel" in case you can't tell--as in David Boreanz, as in Joss Whedon--because nothing makes a home a home like a few vampires and demon hunters. 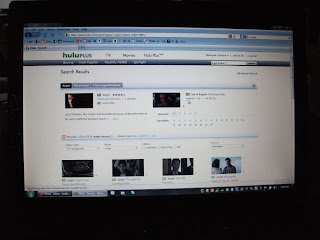 Good thing I made beans for dinner.
Posted by Bobbie at Thursday, December 30, 2010 5 comments:

A "Good" Education in Brief

I was watching a segment on the Today Show this morning about a Florida school run, in essence, by the students. It's about democracy and helping kids figure out early on what they want to do with their lives--what their "callings" are.

The interviewer asked an educational "expert" what she thought of the school. The woman called it "part home schooling, part anarchy." She disapproved of the fact that the school never tests its students. She went on to say, "Without tests, how do they know how good they are doing?"

Hm... Perhaps by watching themselves being interviewed as adults on national TV and seeing just how good those grammar lessons worked out?
Posted by Bobbie at Thursday, December 23, 2010 2 comments: 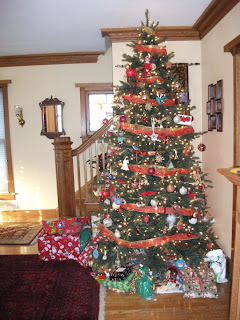 I found the glove. We're very happy together again, and just in time for the wicked weather on its way tonight here in Chicago. I'm all stocked up on milk and Christmas cookies, so no worries.

We did, however, lose a Christmas stocking last week, and initially that loss hit me harder than the glove. I bought three felt stockings when my 13-year-old was a baby. I paid $7.99 a piece for them at TJMaxx. I didn't buy the "extra" two for Ron and me. I bought them for the two kids I knew I'd be having after the first. Of course, we went on to have three more kids, but I didn't want to get too far ahead of myself all those years ago. The fourth one (the stocking, not the child) doesn't match the others very well, but it was the best I could do at the time.

I let said 13-year-old son take one of the stockings to school with him for a French project. Why? Because I thought I was being over-protective of the stocking when I said no the first time he asked. This was on Monday. On Friday, I sent him a text to remind him to bring the stocking home with him so it wouldn't be stranded at school over the two-week vacation.

He came home and confessed: he hadn't been able to find it since the presentation. He'd been looking for it all week, checking with the teacher daily, checking the lost and found daily, scouring the halls, his locker, asking other kids if they'd seen it. All to no avail.

My reaction was to go back to the email I was typing at the time. I couldn't respond right away to him because I didn't know what I'd say when I opened my mouth. He apologized over and over and said he'd buy a new one. "It's not about the money," I told him as I headed upstairs to find a door I could close. "It's the sentimental value."

So I cried for a few moments--less over the stocking than over the realization that my kids are growing up and Christmas is a bigger reminder than birthdays are of that fact. I liked things how they used to be. I like them how they are now. So it only makes sense I'll like how they'll be tomorrow and next year and the next, right? But "sense" doesn't always come into play for me, especially when it comes to my kids.

I went back downstairs, where he was sitting on the sofa waiting for me, visibly upset to have disappointed me. And then I felt bad for making him think he'd disappointed me. We talked for a few minutes. I assured him I wasn't angry. And then I told him I had to head out to buy another stocking. He asked if he could go with me. The talk and the time at the store with him more than paid for the "loss."

I'd read an article earlier that day about depression and the holidays and how the depression generally arises from this sense of loss so many people feel, whether it's the reminder of lost loved ones, lost dreams, or failed expectations. We anticipate so much over Christmas that we're bound to find the reality falling short of the plans.

On the drive to TJMaxx, where I found a perfectly suitable replacement stocking for $7.99 (13 years later), I assured my son that nothing matters more than my children do, and that I don't ever want him or the others thinking that my memories of being with them are more important than being with them in the present.

As long as I can focus on the present, without an ache for the past or a concern for the future, I think we'll all have a merrier Christmas.
Posted by Bobbie at Monday, December 20, 2010 1 comment: 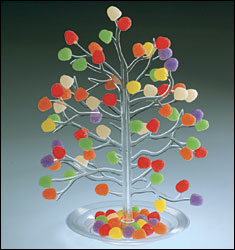 I lost a glove today. I know, I know . . . good thing it's Christmas and now I can tell my husband exactly what I need, right? A new pair of gloves.

But I don't want a new pair. I want the other half of the one sitting all lonely like on my kitchen counter.

I got the gloves more than 10 years ago when we lived in Connecticut. They're a cream knit with a shearling (fake, I'm sure) lining and a leather palm. They're warm and comfortable. I wear them when I'm driving and when I'm just out for walks. I wear them to shovel snow, to go sledding with my kids, and when I'm sitting in the car waiting for them to hurry out after school. They're dingy and stained in spots from where I thought picking up leaves with them would be just fine. They've been through a lot with me and have held up--the dinginess and spottiness notwithstanding--remarkably well.

And I could honestly cry over the loss of one. I even went back to the store two hours later just to see if anyone had turned it in. I left my name and number with the floor manager just in case someone sees the sad little thing and realizes it must have a home and an owner who misses it.

Christmas is a time for holding on to things--of not wanting to let go. It's nostalgia, sure, but it's even greedier than that. It's more than the wistfulness of fond memories. It's the clutching at them and clinging to them and throwing iron chains around them in an effort to make them stay. We can call it "tradition," but that's just shorthand for "please, oh, please, let's not ever change a single thing about this moment, because I can't bear to let go." My oldest child already knows he's getting a guitar for Christmas, and he asked the other day if he could just open it first. I almost screamed at him. "No! You can't open it first. You have to wait until the end, let the anticipation build. I want to see you excited about all of your gifts--even the $10 t-shirt from Target--not just the 'main' one!" I'm clinging to him, throwing my iron chains around him, wanting to keep Christmas the same even if I can't reduce his 5'10" frame and make him the little boy he used to be at this time of year. If I let him change then how will I ever keep the three children that follow him from changing?

When I was a kid, my grandmother had this plastic gumdrop tree. She preferred the spice drops, which weren't at all tempting to me, but the chance to decorate the tree? The very definition of Christmas to a seven-year-old. I can still recall the way the plastic pricked if I pushed too hard. I can feel the squish of the gummies between my fingers and the sugar they left behind. My husband and I somehow ended up with one after we got married. We used it once. It just wasn't the same. Most things aren't.

Now I have to go drown my sorrows in a bag of Cadbury Christmas Balls, which are supposed to be the same thing as Cadbury Mini Eggs, but they're not. Really. They're not the same at all. I prefer the original. It's just how I am.
Posted by Bobbie at Thursday, December 09, 2010 4 comments: