My morning routine (once the kids have left for school and provided I have no doctors' appointments to rush Owen off to) goes something like this: Turn Chicago Public Radio up (it's already on, but I haven't heard much with 4 kids and a husband milling about in the kitchen). Make myself a bowl of Cream of Wheat. (I prefer Farina, but it's almost $2 more a box.) Do the dishes while the cereal finishes thickening. Eat while I read the news and my emails that require attention. Put my bowl in the dishwasher and clean the kitchen while I continue to listen to the morning news.

And the news, of course, has been less than upbeat lately. But it hasn't made me downright angry until today--and I'm not talking about reviewers who dared give Hugh Jackman anything but high praise for his hosting of the Oscars last night.

I'm talking about one woman interviewed here in Chicago who said she's been eating frozen foods since being laid off a few weeks ago from a well-paying job. A dietitian was interviewed for the same segment. She (dietitian) said people often mistakenly believe eating healthfully means paying more for your groceries. Not so, she insists. You can buy a chicken and vegetables and make a few days' worth of soup for much less than it costs you stock up on a few days' worth of frozen, fat-, sodium-, and preservative-filled pre-packaged meals. This recently laid-off woman said yes, she knew that, was sure she could save "a lot" of money if she made her own meals, but (and here's where my blood pressure starts to go up in spite of the fact that I don't eat those sodium-filled frozen foods) cooking makes her feel too much like a stay-at-home wife and mother.

I know it's old fashioned to stay at home. I've known that since I decided this is where I want to be. I've known that since Ron's female college roommates got angry at him for marrying me, someone who "only" had a Bachelor's degree and who wanted to be a stay-at-home mom and who, therefore, was "an insult to feminism." Yes, that's a quote. But not only is it apparently old fashioned, but it's shameful now. At least one woman right here in Chicago would rather go broke buying crap food and then die of heart disease than do anything that might make her feel for a few hours like (gasp!) a stay-at-home wife and mother. Heaven forbid.

Y'know, we, as a society, deserve what's coming to us now. We really do. If we have reached the point where we would rather kill ourselves than live like the middle class, then we deserve to be spiraling downward at a dizzying rate. Glenn Pace of the LDS church said in a talk not terribly long ago that we should *not* be like a parent who, upon seeing his child hurt himself after doing something we told him not to do, says, "Serves you right. You had it coming." And, yeah, sure: ideally, I'd like to be the kind of person who never says "I told you so." But I'm not. I'm disgusted by our sense of entitlement and our downright shame at having to let go of pre-conceived and plain-old wrong notions of what we deserve.

Excuse me now while I go plan tonight's dinner, do some laundry, and vacuum the carpets. Yes, I know, I should be embarrassed to admit that's what lies ahead for me this morning.

And I'm not sure whether that's Cream of Wheat or bile I feel rising in me right now.
Posted by Bobbie at Monday, February 23, 2009 6 comments: 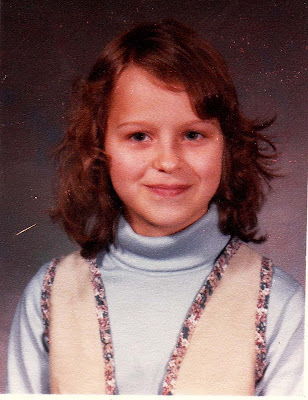 Ivan is having his school picture taken today. He's only in preschool, but the same photographers that contract with the elementary school contract with Ivan's as well. So I filled out the form a few days ago, wrote out the check, and delivered it to his teacher, thinking the whole time, "But Ron takes such great pictures. Why am I paying for this?"

My favorite school picture of myself is from fifth grade. I was a student at the G.O. Center in Lynchburg, Virginia--a program for supposedly gifted students (Gifted Opportunity). Here's what I recall from that gifted year: dodge ball, kick ball, Red Rover, kicking my teacher in the leg because he teased me once, my "boyfriend" calling me "gunky" after I broke up with him, a submarine my father helped me make as a project for 10,000 Leagues under the Sea, and a trip to DC, the group photo of which shows me in a pink t-shirt and sorely in need of a training bra I refused to wear.

In the school photo, I'm wearing a light blue turtleneck and a tan vest with flowered trim. As if the outfit weren't bad enough, there's the hair. The best thing I can say about it is that it was clean and not in the least bit gray. Years later--before I had children of my own--I asked my mom about it: "Why did you let me go to school looking like that?" Her answer? "Because you dressed yourself and once your kids start dressing themselves, you don't care what they wear."

"Not I," I thought. "No way will I let my kids leave the house looking like their mother doesn't care about them."

My favorite school photo of my younger brother, Sean, is from when he was in second grade. He's looking at the camera like he's ready to cry. But he wasn't. He said the photographer told him not to smile so he didn't.

My favorite school photo of my younger sister, Sarah, is from when she also was in second grade. Her hair is curly and cut close to her head in a style more closely approaching a mullet than an Annie-The-Sun'll-Come-Out-Tomorrow sort of 'do.

These 3 shots are the reason I love school pictures. They are completely about truth in advertising. Or at least, in the best cases, they should be. When I look at my fifth grade picture, I don't see the girl labelled as gifted. I see the tomboy I really was. When I look at Sean's picture, I don't see a well-behaved little boy, I see the child who had to be told not to smile because he was spazzing all over the place just a moment earlier, driving the photographer nuts. And when I see Sarah's picture, I see not the smiling child everyone else might, but the one who was crying only a few days before when her (supposedly) gifted older sister--who knew better--thought she needed a haircut, so took a pair of kitchen scissors to her long, curly locks.

When I look back at Ivan's preschool picture years from now, I'll see the little boy I managed to put a nice sweater on that morning, but I'll also see the faint red mustache from the two glasses of soda he drank with pizza the night before as he stood on his chair singing the theme song from "Happy Days."

And they are happy days. Very. Yep, thank goodness for school pictures. They're worth every penny.
Posted by Bobbie at Thursday, February 05, 2009 4 comments: