I started out having a productive morning. Got up early enough to make the kids waffles with strawberries and whipped cream (the spray stuff doesn't count, I know, but today it does, okay?). I washed the dishes (more or less: more, meaning they're in the dishwasher or are drying on the counter; less, meaning  . . . meaning the exact same thing as more) and then headed out by 9 a.m. for a couple of errands. Oh, and I was dressed and showered as well, though not in that order.

Then I got home and by 10:00 my productivity ended. The kitchen now looks like this: 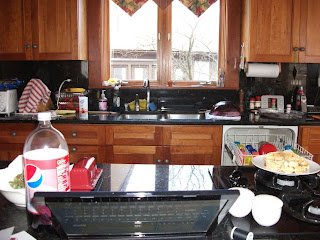 And my six-year-old just annihilated me in a game of Mancala. His exultation was great and only slightly humiliating. But it beats playing his father. My husband, love him to pieces and bits though I may, is the most competitive human being I know. We used to play backgammon when we were newly married--until I realized we would never be more than newly  married if we continued to play together. The game is now hidden under lock and key and we never speak of it. Ever. We also never speak of the time he played Trivial Pursuit with my family and just wouldn't give my sister credit, for crying out loud, for "It's a Mad Mad Mad World" when the answer (yeesh) was "It's a Mad Mad Mad Mad World."

I digress. No surprise there.

I hate a messy kitchen. I can't think straight in a messy kitchen. I want to live in a magazine of a kitchen and not the reality of one, filled with dirty dishes and things that don't have a place because I can't think straight in a messy kitchen and figure out what sort of place those things should have! (Yep. That's a panic attack coming on. Thanks for noticing.) (And that 2-liter of Diet Wild Cherry Pepsi you're looking at probably isn't helping the nerves any, is it?) (Don't answer.)

I want to throw away most of what you see: the leftover waffles, the grapes that are just too sad looking today, the half-eaten banana (WHY oh WHY is an entire banana just too much for a person to eat? Please tell me. Seriously. It's a BANANA, not an entire buffet of fruit. A--one--single--banana!! Just eat the whole thing. Please.), the yellow eco-friendly cloths I bought that have been the bane of my existence because one they dry, you can't get them wet again without soaking them in hot water for what seems like days, those curtains. Ugh. Yes, even those curtains. Whoever lived here before us had them specially made, and I loathe them. I took down the ones that hung over the windows in our breakfast area, but I've never gotten around to taking these down. Why? Because. Okay. That's why. I'm easily distracted. Fine. I'll do it today. Enough with the nagging. Why do I hate them? Why such a visceral reaction to harmless, innocent curtains? Because they have pomegranates and pineapples on them. And big concord grapes and cherries. They annoy me. I can't explain it beyond that. I have nothing against fruit as a rule (except half-eaten bananas!!!!), but I already have fruit in my kitchen. I don't need fruit on my curtains. And they're pointed--pointing down to the sink, reminding me I should be there working and not here babbling. It's rude.

I know I should be cleaning the kitchen, but here's the thing: it's 12:30. My husband and two of my kids will be home any minute now, and they'll be eating lunch. And the kitchen will be torn apart again. Yes, I know this is what life is about: cleaning up the same mess over and over and over again. Okay, maybe life is about more than that, but it certainly involves repetitive clean-ups.

I made my bed this morning. That counts for something, too, right?

Yep. They're home now. Good thing I opted to babble instead of clean. I'm sure they'll all appreciate it.

My point? I didn't have one. I'm gearing up for a week of having all four kids home with me during spring break. I needed a little manic stream of consciousness. Carry on. Enjoy your first full week of spring. And perhaps spring cleaning.
Posted by Bobbie at Saturday, March 26, 2011 1 comment:

I loved bedtime when my kids were babies--and not just because it meant having a few hours of quiet. I loved it because I'd get to sit in the dark with them and sing. I sang "Sweetheart Tree" and "The Bonnie Banks of Loch Lomond" and sometimes a little John Denver or even Laurel and Hardy ("Trail of the Lonesome Pine"). They're the songs I haven't sung since. They grew out of them before I said it was okay for them to. They didn't ask for permission.

I also "wrote" each of them a lullaby. My oldest, now 14, got embarrassed the other day when I mentioned this to him. No, thanks, Mom, you don't need to sing it for me now:

Nothing brings out the sap in me like my children, especially when I think of how different life was for us all when they were still at that rock-able age.

My 11-year-old son got in a fight at school this week, if by "fight" you mean another kid shoved him around for standing up to him and then hit my son in the face before running off to tell the teacher my son had hit him (not true, by the way; witnesses concur). But he was fine--completely unfazed. In fact, he didn't even mention the incident to me until more than an hour after he got home from school. He laughed it off, said the kid is a jerk but doesn't worry him. I think that kid worries me more. I wanted to call his parents, hunt the child down myself and have a few words with him, show up at school and haunt the halls and playground until June. But my son doesn't need me there. He's taken care of the situation . . . and he's stronger for it.

I was talking to my sister about this today, and she said that as much as she wants to fight her kids' battles and take away everything that might make them sad or afraid or alone, she knows she can't and shouldn't. I agreed. It takes more than love and protection to make a child happy: it takes a sense of empowerment. The kid who hit mine isn't strong and he isn't happy. My child is.

I'm not entirely sure how he got that way. I'd like to take the credit but it's not that simple. He's always been his own little person, as I put it. He's never cared what others think of him, never tried to impress anyone. "I know who I am," he told me that afternoon. "That's all that matters."

My 8-year-old daughter isn't quite as empowered as he is. I hope I can say "yet." I'm working on the "yet." She's constantly caught in a tug of war between one group of friends or another. She asked me the other day which of two of her friends I liked better, because, she said, they were making her choose. "Don't choose," I said. "Find other friends who won't make you." I don't know if I helped. That's how parenting goes most of the time: Did I help? Or did I just make matters worse? Did I say too much? Too little? Her grades have dropped recently, and her teacher thinks it may be because the social situation at school is preoccupying her. I want to jump in and fix things, but this is only third grade--only the beginning of the minefield that is the social life of a pre-adolescent girl. I can't fix things. I can only help, whether that's by listening or by agreeing with her that, yes, her friend was mean or by continuing to do what I can to make her feel strong in other areas of her life.

I truly had no idea as a young mother how much as a not-so-young mother I'd want to keep catching my kids and coming when they call--how much I'd want them to "let" me. And I had no idea how hard it would be to see the strings unravel--because they have to--and then hold my breath while they find their own footing. 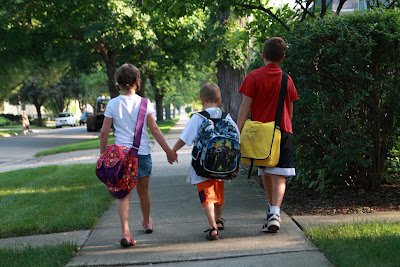