My 10-year-old came home from school yesterday. "Mom! Amy [name changed] said her family is probably going to adopt a kid from Haiti." Now, I've been following the story of the Haitian orphans, and I know, at this point, a couple of things: (1) If you hadn't started the adoption process before the earthquake, you're out of luck for the moment. (2) People who are adopting need to have fulfilled certain criteria, one of which I know this particular family does not meet. That's not me judging them; it's just how the law works at the moment.

I told Owen, "You might want to hold off on believing everything Amy tells you."

Also yesterday, my 7-year-old, Emma, told me the list of presents her friend has told her she has gotten Emma for her birthday, which isn't until May. This same friend told Emma last year that she'd gotten her an American Girl doll. I had to explain to Emma several times before her party that, in fact, this friend had not gotten her a doll because they are very expensive.

I was laughing about all of this on the way to taking my kids to school this morning--this need children have to bring the attention back to them, to make you like them, love them, admire them. Simon, who will be thirteen in a few days, just shook his head. "Mom, it's not all kids. It's girls."

So I've been thinking about that since dropping him off, and it's kind of bothering me now. I have three sons, and I have to admit that I've never had to tell them, "No, Samuel isn't telling you the truth," or "Honey, try not to believe everything Andrew tells you." I'm not saying boys don't lie. Come on: I'm not that naive. But they do, in my experience, lie about different things.

They lie to get out of, stay out of, and altogether avoid trouble. But do they lie so their friends will say, "Yes, you're my favorite?" Do they lie so the other kids at school will say, "That's the one I was telling you about! Isn't that so cool?"

At what point do little girls think they have to be someone other than who they are to be accepted and, better yet, loved? Is it when they sit on the bathroom counter and watch their moms putting on makeup? Is it when their mom has had a near breakdown at home, yelling about the mess she has to clean up, only to put on her sweet voice when she answers the phone in the midst of the chaos? Is it when they hear her complaining about how much she hates the next-door neighbor, only to watch her smile and wave at her in the morning?

Or does it have nothing to do with their mothers? Is it watching commercials for face cream? Or being rewarded with a sticker at preschool? Or is it the fairy tales they read, the happily ever after of being loved because you weren't just good, but Good? Will these girls grow up to be women who are afraid to ever be themselves, either because they've forgotten who they are or because they're sure that without the perfectly lipsticked, pasted-on smile, no one would notice them? 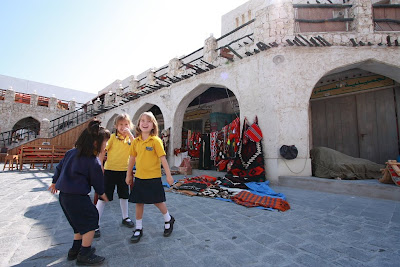 "I grew up kissing books and bread."

That quote is by Salman Rushdie. And I also love this one:

"I have always imagined that paradise will be a kind of library." --Jorge Luis Borges

I literally grew up in a bookstore. I say it all the time, but it's true. From the time I was ten until I was fourteen, we lived in the basement of my family's bookstore--not in the creepy "under the stairs" kind of way, but in the "it was a full-fledged, four-bedroom apartment" kind of way. And at the time, I never loved it as much as I should have.

My parents sold used books as well as new, and one afternoon a customer came in looking for red books. Titles? Didn't matter. She just needed books that were red because they matched the interior design of the room in her house thy were intended to decorate. At the time, the idea of books as decoration was completely foreign--and just wrong--to me. You read books; you don't prop them up on a shelf in order to bring out the burgundy in your carpet. It seemed almost blasphemous to me.

My sons' room has bothered me since we moved in more than a year ago, and I haven't been able to put my finger on the problem. Did it lack color? Depth? Was it imbalanced? Did I need to Feng Shui it (as if I know how)? Then a couple of weeks ago, it finally hit me: the room didn't have a bookshelf. It had books--in baskets under the desk and in a basket by the dresser. But when you walked into the room, you didn't see those books. So I put a shelf in, filled it, put a few picture frames on top, and ta-dah... I'm happy. Would an interior designer approve of the layout? Definitely not. But I approve because the room now feels right; it feels like part of our home. I used books to decorate--but they're books the kids read. The titles matter; the colors don't.

When we were looking for houses, we would find ones that were big enough for our family, that had enough yard space, and that were in a good school district. But we kept running into the same problem: no room for our piano and no room for our books. One of the real-estate agents with whom we worked kept saying, "Oh, but you could put a shelf here. Or here. Or in the dining room; I've seen shelves in dining rooms and they're so stylish." She was talking "a" shelf--as in a ledge. We were talking shelving units--as in the ones that fit 150 or so books each. Multiple shelving units.

I don't understand people who don't read anything more than the newspaper or the occasional Time magazine. I'm not a snob about this. I'm not saying it shows a lack of intelligence. But where does your imagination come out to play? Aren't you curious about history or sociology or anthropology? And how can you feel at home without at least a few rows of books in every room of your house?

Had I not grown up surrounded by the smell of cracked leather bindings and pages so musty they reminded me of the decaying trees and then earth they might otherwise have been, perhaps I wouldn't need books as much as I do. Perhaps it would be a window filled with plants or a great stereo system or a large dining room table for family gatherings.

So I wonder: What physical representation of your own psyche demands a place in your home?
Posted by Bobbie at Wednesday, January 13, 2010 6 comments:

My 10-year-old, Owen, asked me the other night at dinner what the difference is between empathy and sympathy. It's not a question I ever really pondered until after college, but it's one I've thought about a lot over the past several years.

I edited a brief paper today on debt in impoverished nations. I came across a fact from a book by ethicist Peter Singer that, frankly, depressed me. Or perhaps "scared" is the better word here:

Three months after 9/11, $353 million was raised for the families of the officers and firefighters who died in Manhattan that day. The amount came to about $880,000 per family. Around this time, UNICEF published a report stating that roughly 30,000 children die every day around the world from preventable causes. But UNICEF, of course, saw no rise in donations during this same period.

Now, I don't at all mean to imply the $353 million should have been sent to UNICEF instead. But I do wonder why we are more profoundly affected by tragedy close to home than to tragedy thousands of miles away. And is it geographical distance that makes the difference? Or is it our complete inability to truly feel for someone who doesn't share our ethnicity or our socio-economic status or our religion?

I watched the movie "Life Is Beautiful" when I was about eight-months pregnant with Owen. I cried so hard at the end that I had to cover my mouth because I was afraid of the sobs choking my throat. I'm a crier under the best of circumstances, but add a few hormones to the mix, and I'm a wreck. But my reaction was about more than hormones. Ron asked me as we left the theater why it affected me so profoundly: "Is it because you imagine yourself in that father's shoes?" I said no. I felt sad for that father and that son. But as I thought more about it--and even now I reflect back on how extreme my response to the film was--I was lying to myself. The movie broke my heart precisely because I was imagining the heartache of saying goodbye to my child, and imagining my child growing up without me but with a surety of my love for him.

NPR recently aired an interview with a man who has studied Jewish scholar Abraham Heschel extensively. He said Heschel believed all the world's problems could be solved if we could simply feel what others are feeling. This, I explained to Owen over dinner, is what empathy is. Heschel said, "A religious man is a person who holds God and man in one thought at one time, at all times, who suffers harm done to others, whose greatest passion is compassion, whose greatest strength is love and defiance of despair."

Heschel didn't qualify that statement with "who suffers harm done to others who are like us."

Is it really that hard to feel for someone not like us? Do we have to imagine that child starving could be our child starving in order to care? It scares me that the answer, whether we want to admit it or not, is too often "yes."

I don't want my own empathy to be weakly derived from the effort of trying to imagine how I would feel in "their" position. I want it to be derived from understanding how it feels for them to be in their position. That kind of empathy is what can propel us to action. Anything less is what leaves us in barely controlled sobbing in a movie theater.
Posted by Bobbie at Monday, January 11, 2010 2 comments: