From Caveman to Vampire

I was watching CBS while getting ready this morning, and the show had a panel of experts on male behavior discussing the best way to communicate with a husband/boyfriend. The man talked about (of course) evolutionary behavior--how men traditionally only looked each other in the eye during confrontations and how women were used to looking someone in the eye when communicating with them, because their role was to raise the children and you have to look babies and children in the eye all the time. So, the expert went on to say, if you want to ask a man to do the dishes, you can't look him in the eye or he'll feel threatened.

Okay, I'm still laughing. True or not, it's ridiculous, isn't it? And I'm also feeling that maybe it's time to start getting past all of our cave-dwelling issues.

Another expert said we women need to talk in sound bites because men can't focus for the length of a "real" conversation. Sound bites, ladies. But I just can't . . . I can't give in to this piece of advice. It's time to move out of the cave no matter how comfy it's been all these millennia.

My talented friend Brigid Kemmerer posted this video yesterday. I'd seen it before, but I still laugh every time I watch it.


That's not my husband. My husband just made breakfast for me this morning, in fact, and didn't burn it. And, okay, so he may only listen in sound bites, but I can look him in the eye when we talk without worrying about him grabbing a club and challenging me to a duel when he gets back from hunting the stegosaurus that's been trampling our grass. Still, the video is hilarious because it's depiction, not truth.

Anyone who knows me knows I love Joss Whedon. I'm not a fanatic that's reached the join-his-cult stage quite yet. But I do enjoy the heck out of his shows (except for "Dollhouse," of course). I love "Buffy" (even if I'm not a Sarah Michelle Gellar fan) and love "Angel" even more because . . . well, because of Angel. I'm disappointed, of course, that David Boreanaz cheated on his wife, but not nearly as disappointed as she was. I imagine she was hoping for a little more Angel and a little less Throg the Philanderer.

I'm thinking that our fascination with vampires as leading men has a lot to do with the fact (disclaimer: I know vampires aren't real; I'm talking literary fact) that vampires can be hundreds of years old and therefore have had the chance to evolve individually much more than the average Joe. Once you know he's a vampire, nothing else is going to come as a surprise. He'll still bring you flowers. He'll still put the lid down on the toilet. He'll still put his bowl in the dishwasher. He'll still listen to your entire conversation and not just the one- and two-syllable words. And he'll smolder through it all.
Posted by Bobbie at Saturday, January 29, 2011 2 comments:

I don't like having nothing to do. And that's a ridiculous phrase anyway, isn't it? Nothing to do? I've talked here before about one of my mother's mottoes: "Only boring people are bored." So I don't mean I'm bored. I can always find something to do; the issue is whether it's worth doing.

I never watch daytime TV. I'm just throwing that out there at the outset. Notice I said that in the present tense. In our old house, the kitchen opened onto the TV room, and while I cleaned the kitchen or cooked or baked or whatever else I might need to do around the stove, sink, and oven in the course of the day, I would often put on the TV for "company." I hated the arrangement. In our current house, the kitchen is separated from the TV room by a living room, and that's how I like it.

My point (I try to always get there eventually) is that I had the TV on for a few minutes yesterday and "Let's Make a Deal" was on. The studio audience was clothed in ridiculous costumes and wigs, all hoping for the chance to win a vacation or a shopping spree if Wayne Brady would just notice them. I got the same "ick" feeling I get when I see people waiting two hours in line for a 3-minute roller coaster ride. The "ick" feeling is this: Really? That's what we have time for today? Our lives are so easy and our need for a thrill so intense that we have to seek it out in a sweaty line with 200 other people in need of the same thrill? We're so desensitized to what used to pass for joy that we have to come up with new means of feeling that way?

I'm reading At Home by Bill Bryson. It's a short history of the house--how various rooms came to be--and it's fascinating. It's also a reminder of how little "real" work we need to do these days. Preparing a meal, doing the laundry, staying warm, staying cool, getting from point A to point B--these are all things we hardly think about anymore. Or at least those of us fortunate enough to live above the poverty line, which, face it, is most of us in the U.S.--don't have to think about them. So what do we think about instead? And how much do those things really matter?

I read a book a number of months back called Monique and the Mango Rains. The author, a member of the Peace Corps at the time, writes in the beginning about how women in Malawi don't have a favorite dress or a favorite food. They have a dress to wear--one--and they have food to eat . . . whatever might be available to them and not a cupboard full of choices. And, really, they're happier than we Americans are in many ways because (and this is me talking now) they don't have to manufacture happiness.

I love my warm house and clothes and food when it's snowing outside and the windchill is below zero and my "work" for the evening is loading the dishwasher and giving my kids a bath. That's a good life. I don't want to give away all but one dress or live on tomato soup. I just want to make sure that whatever I'm doing in place of struggling is worthwhile. And I want to be grateful. And I want to be happy and to teach my kids that happiness is available all around them--not just on game shows and roller coaster rides.
Posted by Bobbie at Thursday, January 20, 2011 6 comments:

I had a pair of tall, red vinyl boots when I was a kid. They were probably called "patent leather," but leather doesn't squeak like those used to when they brushed up against each other. I wore them everywhere, all of the time, and with every outfit: shorts, jeans, skirts. It didn't matter. They're the one article of clothing I remember from childhood. They had little heels--maybe half an inch--and I walked on the sides of those heels until the shoes became deformed looking, twisted and stretched . . . but more comfortable. See, I was a tomboy up until I hit middle school and really, truly discovered boys. And the boys I liked didn't care so much for girls who could out-tree-climb them or who didn't like brushing their hair, even for school photos, or who spent hours in the woods, imagining they heard Bigfoot or saw the remains of fairy rings.

I'd outgrown my boots by then. I switched to "baby doll" shoes--the black, canvas, Mary Jane ones. More practical. But I never loved them. They didn't feel like "me." Middle school is like that: three awkward years of not feeling like "you" and wondering if it's your shoes . . . or your hair or your clothes or your weight or your family's awful orange VW van with Ziggy painted on the side. (Yes, seriously.)

High school isn't a whole lot better and in many ways it's worse. I'd gotten rid of my baby doll shoes by then and envied the other girls' Tretorns and K-Swiss and Reeboks but tried to find my own "style" so theirs wouldn't "fit" me. I wouldn't want what they had because it wouldn't "match."

College? I borrowed my roommates' shoes a lot. Also their clothes. I was kind of amazed--in a very sad, pathetic sort of way--to realize after college how few of the clothes in my wardrobe I liked. So I started over, putting myself in debt (not obscenely so, though my husband may disagree) in an effort to "find myself." It didn't work.

It took a long time, which it does for most of us, for me to find the shoes that fit me again rather than the me that fit the shoes. I'm comfortable with the skin I'm in. It's a good place to be.

Last night, I was taking my daughter to ballet and passed a children's shoe store that is going out of business. I sent her up to the studio and went back to the store. The first pair I found? Tall, red patent leather boots--in my size, not Emma's. I got her a couple of pairs of shoes, too, but the red boots are mine. 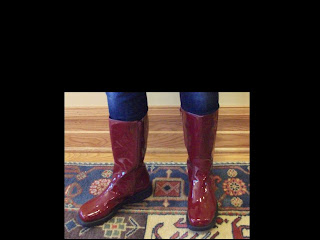